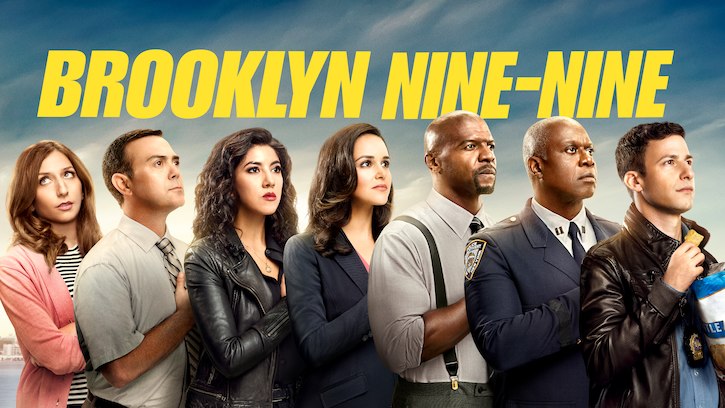 Detective JAKE PERALTA (Samberg) is a good enough cop that he’s never had to work that hard or follow the rules too closely. Perhaps because he has the best arrest record among his colleagues, he’s been enabled – if not indulged – throughout his entire career. That is, until the precinct gets a new commanding officer, Captain RAY HOLT (Braugher), who reminds this hotshot cop to respect the badge.

Jake may have collared more criminals, but Detective AMY SANTIAGO (Melissa Fumero, “One Life to Live,” “Gossip Girl”) is close behind, and she’s keenly aware of how many arrests she needs to close the gap. Amy grew up with seven brothers who were all cops. She’s the first girl in the family to put on a police uniform, and suffice it to say: she’s extremely competitive… about everything.

NBC has renewed its critically acclaimed comedy "Brooklyn Nine-Nine" for the 2019-20 season.

· This will mark the second season of "Brooklyn Nine-Nine" on NBC and the seventh season the series has been on the air.

· So far this season "Brooklyn Nine-Nine" has averaged a 1.4 rating in adults 18-49 and 3.9 million viewers overall in "live plus seven day" Nielsens, an increase of 8% in 18-49 rating and 34% or 1.0 million persons in total viewers versus its average at this point last season on Fox (1.3 in 18-49, 2.9 million viewers). "Brooklyn Nine-Nine" is one of the strongest digital performers on the NBC schedule, deriving 45% of its "live plus seven day plus digital" rating in adults 18-49 from non-linear sources, the highest percentage among NBC shows.

· "It's been one of our great joys as a network to give 'Brooklyn Nine-Nine' a second life," said Lisa Katz and Tracey Pakosta, Co-Presidents of Scripted Programming, NBC Entertainment. "Cheers to Dan Goor, Mike Schur, Luke Del Tredici and David Miner, and our amazing cast and crew who each week turn New York's finest into New York's funniest."

· Critics have raved since the show's NBC launch on Jan. 10. USA Today calls "Brooklyn Nine-Nine" "one of the most reliably funny sitcoms on TV," the Hollywood Reporter said the series came to NBC "without missing a beat" and Entertainment Weekly said the show has a "joyous, goofball energy."